When is the last time you encountered an artist who had no discernable antecedent? A work of art so groundbreaking that it stands alone, separated from time and history? An idea that you truly had not heard before, that hit you like a thunderbolt? I’m not sure in my lifetime if anyone totally bowled me over with utter originality like Poly Styrene.

Poly Styrene was born Marianne Elliott, a working class daughter of a British secretary and a Somali aristocrat / dock worker (depending who you asked) in Brixton, London. Being a mixed-race kid during the rise of the National Front in the late 60’s and early 70’s, she had to endure her share of abuse and isolation. However, this rejection was also liberating – she was able to carve out a place in the world for herself, on her terms and following her own unspoiled muse. After watching an early Sex Pistols show in 1976, she put out an ad looking for “young punx who want to stick it together” and form a band.

Poly Styrene and her band X-Ray Spex are understood to be part of the first wave of British punk, active in the late 1970’s. But Poly herself rejected being labelled as “punk,” figuring it was a label journalists had attached to her. She was part of the same scene inhabited by the Sex Pistols, the Damned, Generation X and the Clash, but she was also so very unexpected in that milieu – an outlier among outliers. A mixed-race woman in a white male world, she favored day-glo and colorful homemade outfits over the black and white tattered uniforms of the punk scene. She wore braces and didn’t put on any sort of tough attitude for the camera – she was shy and sensitive, but sharply insightful.

She didn’t sing of rebellion per se, though you may assume that if you aren’t paying much attention. The most identifiable X-Ray Spex song, “Oh Bondage! Up Yours,” is often understood as a feminist rallying cry:

Bind me, tie me, chain me to the wall
I wanna be a slave to you all

But Poly was quick to correct people who assumed that it was just a feminist song. She was singing about bondage in all its forms – yes, oppression of women, but also oppression of people by race, nationality, etc – “suffragettes, slaves, Israelites,” as she said – it’s all part of the same phenomenon. We all have an innate desire to be free.

But Poly also understood that we can be complicit in being oppressors too. Consider the lyrics of the X-Ray Spex song, “I Live Off You:”

Poly Styrene was an observer, not a critic. She wasn’t trying to change society; she was holding up a mirror so we could see it more clearly.

The name she gave herself – Poly Styrene – tipped her hand about her view of the modern world. Her own punk stardom was just as plastic and synthetic as her name. She observed commercialism and consumerism infiltrating every aspect of our daily lives – the artificial world destroying the natural world. She didn’t sing the praises of this transformation, nor did she scream a rallying cry to overturn the system – she described the world and let people judge for themselves.

Or take a listen to “Art-I-Ficial”

I know I’m artificial, but don’t put the blame on me
I was reared with appliances in a consumer society

When you’ve been an outsider all your life, you may have a unique sensibility, but you lack a support system. Even in the punk scene, Poly was admired but not part of the “in” crowd. She was voraciously consumed by the public, but truly loved and understood by only a very few individuals. Social isolation combined with fame took their toll on Poly.

When X-Ray Spex went on tour to New York, where crass commercialism was next-level compared to her London home, she saw a future that she found perverse and frightening. During her time in New York, Poly said, “The weird thing about the plastic is that people don’t actually like it, but they develop a perverse sort of fondness for it.” She would get random guys trying to grab her in the middle of concerts. Drugs were harder and becoming more common. As she became famous beyond a small underground scene, she started to see its dark side.

Her mental health began to deteriorate. She cut off all her hair one night in John Lydon’s flat. A few months later, she claimed she saw a “bright ball of luminous pink energy like a fireball” descend from the sky. She was soon placed in a mental institution, wrongly diagnosed with schizophrenia, and told she would never work again – at the age of 21.

After her time in the hospital, she returned to X-Ray Spex for a brief period, but she couldn’t reconcile her loathing of the artificiality of the world and being a product more than a person. She needed to, according to her daughter Celeste Bell, “kill Poly Styrene so Marianne Elliott could survive.” Through her multiplicity of identities – as a mixed race woman, as a punk pioneer, as a celebrity product – she found no comfort, only a big hole that no amount of plastic conceits could fill.

She summarized this feeling in one of X-Ray Spex’ most prescient hits, “Identity”

Identity
Is the crisis
Can’t you see
Identity identity

She left the band in 1979 and recorded a solo album in 1980. Translucence was a very different musical direction, much more soft and comforting, almost airy. Coming from one of the queens of the underground, with a voice that could make a banshee wither in shame, the new musical direction was not embraced by fans or critics, and her record deal was cancelled. It was like she was singing to soothe her own soul, and hoping it would help soothe others as well.

Having found no comfort in the underground, Poly Styrene sought a spiritual connection, something that would transcend the banality of modern existence. She found a sort of family and purpose when she joined the Hare Krishna community at Bhaktivedanta Manor in the Hertfordshire countryside. She changed her name yet again – she was bestowed the name “Maharani” while in the community. Here she reconnected with former X-Ray Spex saxophonist Lora Logic (pictured below, with Poly and Poly’s young daughter, Celeste Bell).

Unfortunately, she could not escape her demons, and her mental health issues remained untreated. She left the manor with Celeste, and eventually she lost custody of her daughter due to neglect – she was not capable to take care of her daughter in her mental state.

Years later, she did get an accurate diagnosis of bipolar disorder and got treatment. She moved to Hastings and found comfort being near the sea. She eventually reconciled with Celeste and recorded another solo album some 30 years after her previous effort. Generation Indigo was released in March 2011, one month before she died of metastatic breast cancer at age 53.

Poly Styrene lives on as a necromantic love icon whose stature has only grown as a new generation has discovered and embraced her. Her songs with X-Ray Spex still resonate today. In 2019, the book about her life, Day-Glo: The Poly Styrene Story was released by her daughter Celeste and Zoe Howe.

And just a couple of months ago, a documentary about Poly’s life was released – Poly Styrene: I Am a Cliché.

The movie is a pretty straight-forward documentary telling of Poly Styrene’s life – her upbringing, her dazzling but brief stint with X-Ray Spex, her mental breakdowns – all told through the lens of her daughter’s perspective. It’s not entirely fan service, as it’s more biographic than hagiographic, but it is definitely must-see material for people who love Poly or first-wave British punk in general. Someone who has no clue who Poly Styrene is will probably come away with some admiration for her music and how groundbreaking she was as an artist, but they may not become an instant convert.

I was approached by mt58 (the Dean of TNOCS) ostensibly to write a movie review of this documentary. However, I didn’t want the movie to be the story – I wanted Poly to be the story. The movie gave me a lot of material. And I make no pretense whatsoever about being objective here… I’m biased to the extreme.

I took on my own TNOCS handle as an homage to this most original artist. Take Poly Styrene in her time – whose path did she follow? Whose music or ideas did she imitate? I think you’d be hard pressed to answer those questions. She seemed to have no precedent – she arrived fully formed as a particularly open, observant and sensitive teenager – and she spoke truths we are still struggling to learn more than 40 years later. Even in her iconoclasm, she recognized her own propensity to be a cliché – the tendency we all have to regress to the mean, to accept the artificiality around us. But at the same time, if you are always pushing against the bounds like Poly did, how lonely is that existence? How well can anyone sustain living with that constant itch of being surrounded by wrongness? What tools can you develop to understand such an alien and unnatural world – the one we inhabit?

Gina Birch of the Raincoats said of Poly, “Her legacy was to open up the box – give everyone tools and new ideas and new possibilities.”

It might be a stretch to say Poly Styrene’s mental illness was caused by the artificiality of the world around her, but it was an aggravating factor and an impediment to her own sense of satisfaction and self-realization. And we have a very long way to go to make a world worthy of our souls, to make a world where Poly would’ve felt at home. Pauline Black of the Selecter said it best: “The world is playing catch up with Poly Styrene, not the other way around.” 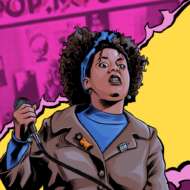 Thanks for this thoughtful write-up. I learned so much from you here and look forward to seeing the documentary.

Excellent write up! The “Generation Indigo” album is really good so she went out on a high note, much like David Bowie and “Blackstar.” She was a unique voice.

Great piece of writing. My entry into punk and new wave came through the usual suspects of Sex Pistols and The Clash. As a teenager I then bought a few punk and new wave compilations and X-Ray Spex were normally there with either Oh Bondage! Up Yours! or Identity. As great as both of those were I didn’t dig any deeper at that time, either into the music or the story behind the band and Poly.

I saw the I Am A Cliche film when it came out here last year. It was made with so much love and I thought the tone and look of it were perfect. Its to its credit that Celeste didn’t shy away from the difficulties of having Poly as a mother but it was never judgemental and did a great job of understanding her and setting out what shaped her as a person.

Between the film and your write up they make a great tribute to Poly.

We all appreciate your time and talent in the crafting of this excellent piece. Good on you, friend Pauly!