Even the superheroes had to start somewhere. Here’s a fun list that marks the “birthdays*” of some famous pop culture, comic book, and movie ‘toon icons… with some other famous “firsts” in the same year.

(*…after cross-checking multiple sources that do not always agree on some details.)

Is there anyone on the planet who has never heard of Superman? This famous fictional character is, well, a world-renowned celebrity of sorts, albeit one who never ages. The superhero, hiding in plain sight as reporter Clark Kent, made his debut in Action Comics #1. The last sale of the original comic is reported at over three million dollars.

According to Wikipedia, the two creators, writer Jerry Siegel and artist Joe Shuster gave the character copyright to Detective Comics – and sold their first Superman story for just $130.

Batman first appeared in May of that year in Detective Comics #27, created by artist Bob Kane and writer Bill Finger. The value of the original edition has been estimated at over a million dollars. The original price of the book was 10 cents.

Amazing Fantasy #15 marked the first appearance of Spiderman. This issue sold for over $1 million in 2011. The superhero was created by Marvel Comics writer-editor Stan Lee and artist Steve Ditko.

Same age as:
Who Wants To Be A Millionaire?

A creation of marine biologist and animator Stephen Hillenburg, SpongeBob first appeared on Nickelodeon TV in 1999.

At first, Charles M. Schulz presented him as Charlie Brown’s silent pet dog in the Peanuts comic strip. We began to see his “thought balloons” in 1952.

Yuko Shmimizu designed Hello Kitty for the Japanese company Sanrio. She first appeared on a coin purse in 1974 and came to America in 1976.

Same age as:
The Grammy Awards

The Smurfs were created by a Belgian comic artist named Peyo. The name of the family of blue dwarfs came from an invented French Word and they, in turn, came to American TV on Saturday morning cartoons in 1981.

Slight incarnations of the Muppet character known as Cookie Monster had previously started in commercials and TV appearances. But, as the Sesame Street regular we know today, he debuted in 1969.

Some say the Masked Man was inspired by a Zane Grey book from 1915. But his first appearance came in 1933 on a radio show. George Trendle and Fran Striker are credited with character creation.

This was a hard list… since there are literally thousands of fictional characters to choose from!

Who are some of your favorites? Are any of them the same age as you? 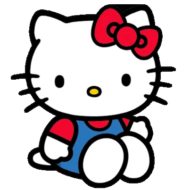 Welcome to the collective!

This is great trivia, and I have to say I’m shocked The Smurfs are that old – I assumed they began in the 80s when they took over Saturday morning cartoons!

I thought the same.

One of my favorite trivia questions involves the little blue guys:

How tall is a Smurf?

An inspired guess, but, no.

Ask a smurfy question, get a smurfy answer.

A: A Smurf is three apples tall.

I was gonna say that… However, the animators of the 80’s cartoon must have grown up with apples the size of walnuts.

Welcome, Joyce V, and thanks for a fun debut article!

The Flash was my favorite as a kid, but the movies and TV shows have been a disappointment. There have been several versions of the Flash, starting in 1940. (I just looked it up.)

It was the second version, which ran from 1961 to 1985, that was the one I liked. His ability to run so fast he could run across water got my imagination going. If I could do that, I’d run to Africa and be back in time for supper!

Loved The Flash. Also my favorite.

It’s funny, when I see the term comic, my mind still thinks of Peanuts characters and the like, despite our entertainment industry being awash in superhero lore. I adore the Peanuts comic strip and I think often of how old they are. For me the classic era of Peanuts was from the late 50s to the early 70s, though both the beginnings and endings of Peanuts are worth reading. The first strip had Charlie Brown, Shermy, and Patty.

Another character that I’ve always loved is Alfred E. Newman from MAD magazine. He never really plays a role anywhere, he’s just the icon of the magazine. Looking into it, I see he started in December 1956, though he is based on advertisement drawings from many years before.

Good to see another new recruit.

Like Link when it comes to favourite comic book character its not superheroes that I think of.

For me its Dennis The Menace. Just not the Dennis you’re all thinking off. You want weird synchronicity? There are Dennis The Menace’ on both sides of the Atlantic, both with a pet dog and both debuted at the same time. To the day; 12th March 1951. Which makes them the same age as…my dad. To within 3 weeks. Or for extra trivia value the same year that a certain Monkee mother; Bessie Nesmith invented Liquid Paper.

British Dennis appeared as the cover story in the weekly Beano comic that a young JJ read through much of the 80s. He’s still going now having also branched out into animated series. Along with his dog Gnasher, Dennis was a bad boy, 10 years old and the scourge of his teachers, parents and in particular, his neighbour Walter the Softy. Always dressed in distinctive black and red striped jumper, black shorts and thick black spiky hair.

As a (mostly) immaculately well behaved child (bonfires notwithstanding) there might have been a bit of wish fulfilment in my love of Dennis. I was even in the Dennis The Menace Fan Club. Member of which were meant to great each other with the secret greeting “Ding” (as in Dennis Is Never Good) and the response “Dong” (Dennis Owns Naughty Gnasher).

Last edited 26 days ago by JJ Live At Leeds
8

A third Dennis has entered the chat.

Cowabunga dudes!!! It’s my little brother’s most favorite heroes on the half-shell.

Calvin and Hobbes. It is difficult to separate them into a single character but gun to my head – I would go with Calvin. I love the self-centered innocence of his worldview. It just cracks me up. He is much younger than me. He was born in 1985 and I am a child of the 60’s.

Last edited 26 days ago by reggie
7

Welcome. I appreciate the discreet shout-out to South Park.

The goth kids are my favorite cartoon characters ever, followed by Scooby-Doo. Just once, I wish Thelma would insist that Steve and Daphne watch the dog. Or let her hang with them, the cool kids. But I guess nobody likes a third wheel.

I also like how the people in the comic strip For Better or For Worse age.

I always thought The Simpsons should have taken that route. I think they could have remained relevant across the decades that way.

See also: Gasoline Alley (in which apparently nobody ever dies either, so patriarch Walt Wallet is well over 100 years old by now). (Edit: Wikipedia says characters do die in that strip… but not Walt).

The year I was born marked the debut of… Zippy the Pinhead. Not a favorite of mine though.

Great article, Joyce! That was a fun read.

Probably the coolest character to debut in 1981 was Rogue from X-Men.

Thankfully, she’s one of the coolest characters ever!

(We totes have everything in common, obvs.)

Awesome, another debut!! Welcome Joyce!! To think, Smurfs are the same nationality as Hercule Poirot. I’d have never guessed!

I was a total comic strip aficionado as a kid, I was big on Garfield, The Far Side, Peanuts, Opus and Bill The Cat from Bloom County…

But the GOAT had to be Calvin from Calvin & Hobbes.

Last edited 25 days ago by dutchg8r
5

During my “peak output days” over at SG, I used to love to take familiar comic strips and their characters, and put them into our comment section universe.

I had fun with inspiration from Berkeley Breathed, Gary Larson, Stan Jaffee, and a few others.

Bill Watterson was definitely next on the list. But I don’t think there would be any interest over there these days.

And of course, I sort of got preoccupied with this place.

I loved those pieces and would welcome them over here! The vibe on the mothership does seem to have changed. I still read the reviews and fill out the polls, but I no longer read all of the comments. Thank goodness for this place.

My current favorite comic character is naive, big-hearted Pig from Pearls Before Swine, which went national in 2001, the same year the iPod was introduced.

I’m not into fashion, but I like graphic design. If this was a Threadless tee-shirt, I would buy it. I used to add one shirt by the week. As of late, though, I’ve been choosing food and gas.

Standing by with her spiffy holiday-themed steno pad in hand,…