A pretty little ditty by Crazy Town called Butterfly was just starting to zoom up the charts.

I’d bought the CD single and thrown it into J’s “between-singers” rotation.

And it was a floor filler.

Being essentially a rap record, I figured it was squarely in my wheelhouse. By this point I’d discovered a couple of stores that sold karaoke discs, so if there was a song I wanted to try out that J didn’t have, I had the option to buy my own.

The problem was they were not inexpensive. So I’d usually only buy a disc if it had at least three or four songs on it that I thought I could handle. In this case, since I already had the Butterfly instrumental on the single, why not save some money and just sing over that?

Bonus points: since it was the original, and it wouldn’t have the borderline chintzy music that you sometimes get on karaoke versions.

The Downside? No lyrics to read off the screen, so I’d have to memorize them. But hey, no problem, right? You just listen to the song a few times and sing along.

I was still almost a year away from home internet, so I couldn’t just pull up the lyrics off some website, but I could write them down by ear, so I’d have something to look at while I practiced.

(Miraculously I did end up writing them down correctly. No mondegreens here.)

I figured I could use my handwritten lyrics as a cribsheet; if I forgot a word, then I’d have it right there in my hand.

That night at Fanny’s, I give J my request slip and the disc, and soon enough I’m called up. The music starts, I lead off with two rounds of “Come my lady, come come my lady, you’re my butterfly sugar baby.”

Feeling pretty proud of myself.

And then my mind goes blank.

I quickly remember the sheet of paper in my hand, but to fit all the lyrics on it I’d written realllllly small. I’m suddenly aware just how dark it is in there. And how bad my night blindness is.

I’ve got the page almost up to my face and still can’t make out my own handwriting.

There are a few gel lights on the floor around the front of the stage. They’re red, blue and green and not all that bright at all – but they’re my only hope. I drop down to my knees and I put my face right down by the lights, frantically searching for a word that makes sense.

My brain has gone into full-on escape mode and I’m completely unaware of anything going on around me. I have no idea how the other bar patrons are reacting.

Suddenly, my roommate Rob jumps up on stage and grabs the other mic. I’m thinking, “HALLELUJAH I’ve been saved!” He can cover for me while I focus on the tiny words in front of me.

…That last part morphing into an approximation of Dexter Holland’s voice in “Pretty Fly (For A White Guy).”

By this point we’re somewhere into the second verse. By the grace of God I’ve finally found my place on the page. So for the rest of the song, you’ve got one guy rapping while huddled in a near fetal position by the edge of the stage, and another guy bobbing and weaving back and forth throwing out random, “Come and dance with me, UH HUH! UH HUH!”s.

The good news is it was soon over, and no lasting damage was done. I was able to redeem myself that night with a few easy songs to assuage my embarrassment, and rebuild my fragile ego.

I spent the entire week playing nothing but Butterfly over and over until I was nearly sick of it. But by the following weekend I knew it backward and forward. And when I got my second chance: I nailed it.

Butterfly became my signature karaoke song for a while… at least until it finally got an “official add” in J’s karaoke library and other singers could choose it.

But even then, I’d still perform it using my own instrumental copy from the CD single.

I’m not entirely sure why I gave up singing karaoke.

At some point J lost his gig at Fanny’s. The hotel was renovated, so that bar as we knew it disappeared. He had a few other shows during the week at other bars. For a while, I went here and there. But once I hit a certain age, it became harder for me to stay out late and still function at a reasonable level the next day at work.

There was also a period where I lost touch with current music. Singing the same old “oldies…”

… just lost its luster for me.

One day I may get back out there and give it another try. But until then, I’ve got my memories.

And for the most part they’re pretty good… 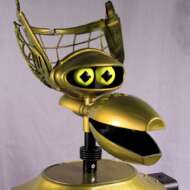 Florida Man, but not the one always in the news...

I’ve a feeling this, or a link to it, will make the mothership very soon. Great story, Aaron.

Indeed, in less than a week… in fact, the idea for this series grew out of a reply that I was planning to make under DJ Professor Dan’s “But can you karaoke it?” post when that particular song came up. The timing worked out pretty well, eh?

Oh man, your story about not being able to read your notes triggered a panic-soaked memory of my first talk at a research conference.

Long story short, I opened my Powerpoint file at the podium only to find that all the notes that I had embedded in the slides were suddenly inaccessible. No notes for me!

And so began my first professional talk to a fairly large audience. The start of it felt like a nightmare come true. I eventually did find my footing (after all, at least the slides themselves were still accessible) and overall, I think it went okay. I’ve certainly since gone through plenty of talks with nervous and socially awkward presenters. I’ve come to appreciate that the person who noticed the most and cared the most about every strained second was Me. And that was probably the same in your situation.

Still, good on your friend for jumping and lending a hand. What’s the science talk variation of that, I wonder? “Visual cortex, baby! UH-HUH UH-HUH!”

I used to share this video with my classes when discussing the importance of knowing the material and not winging it. BOOM GOES THE DYNAMITE!!

I really hope that kid came to the realization that being a newscaster was not in his future.

That would be a nightmare for me, Phylum… I HATE public speaking as it is, but doing it note free… hell no.

This reminds me of my cricket team’s season-ending dinner in 2006. While I was serious on the field, I tended to keep things light off the pitch and was viewed as a jokester, even though I was captain for a number of teams.

The team dinner usually included some type of entertainment, and always involved the players. This year, our social coordinator thought it would be great if I performed “Gold Digger” to the team. I went along with it, but like you, wasn’t sure I knew the words and had no idea why this was a good idea.

It wasn’t: I immediately forgot the words to the song, and instead spent the four minutes or so gyrating and throwing myself around the floor.

The audience was mostly south Asian, and mostly male. I’m not sure why I thought this would cover for the fact I’d forgotten the words, but it was NOT the highlight of the evening.

You’re selling yourself short there, gue! I’m sure it was the highlight of the evening, just not for the intended reason… 😄

A – 3K, bringing the funny! Good on you for such an entertaining miniseries. It was a delight!

And, as a bonus: a new tnocs.com catchphrase is born. Uh huh, uh huh!

And all the girlies say –

Last edited 4 months ago by dutchg8r
5

On the other end of the ocular spectrum, I played several shows with a singer whose eyesight was so good he had a binder of lyrics at his feet where the audience couldn’t really see it in 10pt. font! And he was 6’3″ or 4″. How he ever read anything that way is beyond me.

I’ve seen setlists at musicians’ feet before, but lyrics? Dude has a serious gift!

I could not stop laughing aaron, this was brilliant.

And of course mt’s graphics and captions were so genius – loved the BSOD one!

“Butterfly” is a fantastic song, but boy it do its lyrics move fast. If you managed to conquer it after, dang, kudos to you!

Thanks! Like I said, what I lack in vocal range I make up for in rhythmic flow. I also used to do the Bloodhound Gang’s “The Bad Touch”, you really have to practice when to take your breaths on that one if you don’t have another singer to tag team with.

One speed-lyric tune I was never able to handle was “One Week”. I tried it a couple times but even with having it memorized I just couldn’t make it through without stumbling…

I thought I didn’t know this song, until I got to the bold type. I know this song. And then I couldn’t unhear it. That’s earworm. I’ll miss this series, Aaron3000.

That sounds like the real life equivalent of a horrendous stress dream. Well done on not fleeing the stage and getting through it however you could. And then nailing it the following week is like the Hollywood ending. Redemption for the heroic rapper – was Eminem paying attention? 8 Mile came out the following year – any similarities purely coincidental I’m sure.

Last edited 4 months ago by JJ Live At Leeds
4

Thanks JJ… but I fear if I had to rap freestyle I would fail miserably (unless I had a Cyrano feeding me lyrics through an earpiece).

@Aaron3000 I really enjoyed this series. I said awhile ago in the mothership that I envy most of you have great karaoke stories, because I’ve barely been in a karaoke place because I don’t have anyone to be able to go.

This last story was awesome, I personally don’t like much that song, but it must have been great to see how did you save heroically your performance.

Thanks Edith! The great thing about karaoke (assuming you’re not in one of those places with private rooms) is you can go by yourself, sing a song or two, and then disappear…or, make friends with other singers while you’re there!

And yeah, I know “Butterfly” is polarizing… I’m not even gonna try to predict whether Tom is going to praise it or roast it…

Excerpts from The Undead Karaoke Night:

Vampire #1 and Vampire #2 smelled a ringer. Vampire #3 was actually a goth. He met a girl. Guess what her name was? Turned “Vampire #3” into a real vampire.

It just dawned on me that this could be interpreted the wrong way. I was so fixated on the vampires.