It’s been awhile since the last time I talked about personal aspects of my life (virtual 1994, if I remember well.)

So… remember this one?

After I left high school, I studied a secretarial career for two years. There I met there a few girls that were for a certain time in my life, my best friends. (This actually could be part of another story…)

Over the next few years, I started to work in different places. At the same time, I finished high school in a kind of “equivalence system” (starting from about 1998 to 2000.)

By 2001 I finally had the opportunity to be able to enter college. My sister, who had her struggles as a student, was about to begin college too. But she was in a different school, and would study for a different career.

My classes began that September. We had a four-month period system, unlike the traditional two semesters as most other schools did. When I registered and chose my classes, it was recommended to take common subjects with students from other majors, as well as the subjects that were the basis for my major. The next period would be the same way.

The college was divided in two locations in the city: the one that I was studying was in one house, and the classes for the other careers were in another house. On that registration day, I met two girls that would have the same schedule as me. We would see each other the first day of classes.

On the day that the classes started, we were in the common subjects class. Three guys sat nearby, and began to speak with us. The guy who approached first introduced himself and his partners.

He, along with one of the other guys was studying Engineering. The third boy was studying another career… but I don’t remember which one.

A side note: on September 11th, I had classes, but that was the day when I began my classes later, at 9:00 if I’m correct, so I could watch the morning news, and I wanted to keep watching but I had to leave, and when I arrived to college I had Computer class, but no one in that classroom seemed to knew about the news, and I couldn’t comment with anybody about it. So through the afternoon I learned more about the attacks. Some time later, I knew that in other classrooms some students and teachers were watching the news on the T.V.)

The six of us were getting along very well. We used to hang out in the cafeteria after classes, or go out nearby.

But I couldn’t say that we were friends. And it didn’t take too long before I developed a crush on F.

He was very charismatic. A visible leader; maybe he wasn’t too tall, but he had a beautiful smile. And I liked his eyes (did I ever mention before that I have a thing for green-eyed men?)

His taste in music was similar to mine, though I didn’t know that immediately.

He came from one of the wealthiest families in my city, but you couldn’t tell that when you saw him. He drove a red used car and put it the nickname of “El Lincoln” as a joke for “L’Incomplete”).

But he had a flaw and a major one: he had a girlfriend.

And he talked all the time about her…

in fact to this day I can’t stand the nickname he used to refer to her.

Luckily I don’t hear it that often…

One day, F invited nearly all of the students to a party he was organizing for a Friday. It was near the outside of the city. We had to pay, because that place was like a farmhous, that had a space for aficionados to bullfighting small cows. And basically, for drinking.

I bought the ticket to go, but the female classmates weren’t going to go.

I tried unsuccessfully to go there with other classmates that I didn’t see too often. Supposedly, they were going to give me a ride to the party, but that day I never found them. I didn’t have anyone’s number, and my mother had to drive me there.

I went there because I already paid, but I couldn’t speak to many people. And F barely noticed I was there.

I had to call my mom to pick me up. She came with my sister and her friends.

When I got home, I locked in my room, and sobbed quietly, feeling miserable.

One day in Economics, F was messing with my hair constantly and distracting me. I answered by hitting his arm, taking him by surprise. I probably should say that back in the day when I felt rejected, I used to be moody and sometimes aggressive.

By the end of that four-month period, I knew that F wasn’t getting good grades in the Investigation class. But he didn’t seem to care, and when the period ended, he just went to the the location for the next period to take the classes that were required for his major.

The next semester, my classes were mostly in the afternoon. I barely saw the girls who I was hanging out with. One of them told me that F passed by our college house to invite them to his birthday party.

I wouldn’t dare to ask if he asked for me. I think he didn’t finish his studies in that college… or he didn’t finish at all, because years later when I graduated, I looked for his name in the list from Engineering: and he wasn’t there.

I didn’t think much about him, but months after I stopped seeing him, I saw a picture of him and the girlfriend in the socialite section of the newspaper; that was when I knew her name. About four or six years ago, I felt curious and tried to find him in Facebook, and I saw that he didn’t marry that girl. Surprisingly he didn’t marry in his 20’s, like most of the eligible bachelors in my city used to do. He had a child and apparently has traveled around the world with his wife.

It’s funny how our memories work, because some time ago over at the mothership, the song “Ces Soirées Là” by Yannick, a French cover of December, 1963 (Oh, What a Night) was mentioned.

That triggered this memory.

I couldn’t help feeling sad, because it led me to a few “what if” scenarios.

Even if I don’t like the “what if” scenarios in TV shows.

I wouldn’t call him “the one that got away”, because we never really were friends. But more than the physical attraction that I felt, the things that caught my attention were his character. He seemed to be a light hearted person. And most of all, his sense of humor was the kind of thing that I’ve never seen in anyone else.

For some time I thought what would had happened if he would gave me the opportunity for us to know each other better.

But the real question is: what would have happened if he had given himself the opportunity to know someone different?

I’m the kind of person that tries to make sense of everything. And I have asked myself too many times why I’ve met certain people.

There’s a “blessing in disguise” in my life: it’s when a person walks out of my life, he/she never comes back. 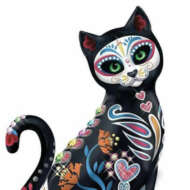 Single Hispanic female. I wish I’ve been a storyteller, but it is what it is.

Thanks for sharing this story, Edith. I, too, often hear that everything happens for a reason. I think it can be an unintentionally cruel balm to people who are hurting. I think of it as each of us strives to make meaning or sense of the world and our lives, but some things don’t make sense. That’s when I try to be comfortable living with the mystery. It can be tough, but as you note, it can be intriguing, too.

It took me a minute to figure out what “everything does not happen for a reason” meant, but I think I get it now. If I had kissed Beth when I had the chance in high school, I might never had met the lovely Ms. Virgindog.

Thanks for mentioning how cruel that statement is to someone who is grieving. One of the worst. Very close to “God wanted another angel”, although not up there with the very worst, “You’re still young. You can marry again, have other children, etc.”

There is an entire collection of such statements. They sting.

I’m blessed to have somehow figured out when I was younger that when someone is grieving, you don’t necessarily have to fill in the silent spaces.

“I am so sorry for this, and how hard terribly difficult this must be for you.”

I try to remember to stop there, and just listen.

Listening is the key. And it’s hard. We are so uncomfortable with silence that we fill it with inanities at best and cruelties at worst. Unintended cruelties, yes, but cruelties nonetheless.

Yeah, I have plenty of those “what if” moments peppered throughout my past, with some so potentially crucial that I might not recognize those alternate-universe versions of me if I met them!

As Chuck suggests, sometimes living with the mystery is best. The reality probably wouldn’t have been as exciting as what’s in our imaginations anyway.

Oh what the hell, I’ll indulge myself a little bit. “What if I never heard that Nickelback song…”

My mind always wants to play the “what might have been” game, looking back at every supposed missed opportunity in my life. But that’s really all it is, a mostly fun exercise that doesn’t really have any sure-fire outcomes (much like the musical what-if scenarios we got from JJ yesterday). I’m happy where I am in my life now, and your conclusion is spot-on, Edith.

Noting the parallels of JJ’s and Edith G’s pieces was super-observant of you. Well done, A-3K.

Thank you guys for the feedback, and yes @Aaron3000, I noticed the similarities between JJ’s thoughts and mine. Great minds I guess 😁.

This tugged on some heart strings…and brought back a lot of memories for me.

I got married in 2011, ten months after I’d finally forgiven my mother for walking out of our lives when I was eight. It was the second time I’d seen her since she left, and I thought I’d been irreparably wounded by her absence.

As a result, there were a lot of relationships I walked away from because I didn’t feel worthy, and feared commitment/vulnerability. While I read your article this morning, with the rest of the house still asleep, I thought of the serious ones…the two women whom I could’ve married, but I would’ve been a horrible husband/father.

“Everything happens for a Reason”? Unfortunately, most of the reasons in the past were my fault.

P.S. You ARE a storyteller, and a very good one.

Thank you @thegue for your kind words and for sharing your experience.