When I was twenty-four, I made a mistake in class.

And there may be a few students still traumatized by it.

The year before I joined the staff at my first teaching job, there was a massive addition put on the high school. Most departments requested to move their classrooms to the new building; the history department chose decided to occupy the third floor in the old building, but the reasoning was sound:

A great plan, but there were some drawbacks.

My seventh period that year had a few students who liked to consider themselves “tough.”

But they really weren’t, especially when our unexpected guest showed up to class.

Maybe cool students and supervisors didn’t want to make the long journey to my classroom, but a field mouse did, and in the middle of class came from behind one of the filing cabinets and wandered between the desks.

Three of the toughest kids in class screamed, and jumped on top of their desks. Their shrieks chased the mouse back where it came, but class did not return to normal. As the bell rang, I asked the students not to tell my incoming class what had happened, but kids will be kids.  One girl in particular came to class excited.

I pointed to the filing cabinet, and she and a few others went to help the little rodent, and within a minute or so had the tiny mouse hidden in her hands.

“C, can I take the mouse downstairs and let it go?”

I didn’t want my students wandering the halls, no matter their good intentions, so I came up with a better plan.

I told her to throw it out the window.

She didn’t believe me at first, but I was very self-assured, and told her the ground was soft enough to land with little issue and scamper off into the woods. The class, now twenty strong, gathered around the third-story window, and waited for Farm Girl to launch the unsuspecting mammal.

I’d like to blame Farm Girl on her throw, or maybe the fact that the windows didn’t open entirely (they were the type that were attached at the bottom and angled inward when opened, so very difficult to get any leverage behind a throw), but really the guilt was with me. Frankly, I should’ve let her go downstairs.

Farm Girl “threw” the mouse…and the entire class watched as it fell towards the ground…and clipped the edge of the first-floor greenhouse aluminum siding, then spun rapidly until it hit the sidewalk.

The mouse did not run off into the woods.

A few sobs broke out in the class, a few whimpers, and definitely a shriek from Farm Girl, just a little less loud than the tough kids in my previous class.

I did the only thing I could.

“Kids… and now we’ve learned…ALL things are affected by gravity, great or small!”

One of the male students came up to me and asked quietly to go downstairs and clean up the sidewalk.

It was the best idea in class that day. 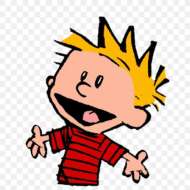 Really puts the “dent” in rodent!

I saw the “Defenestration” teaser title yesterday, and wondered where that could possibly go. And the answer hit with a tragically amusing plop.

By the way, the only reason I know that word is from reading a Calvin & Hobbes poem as a child: “A Nauseous Nocturne.” Quite appropriate given your avatar!

My knowledge of the word comes from the MST’ed film “The Pumaman”… always found it strange that being tossed from a window was a common enough occurrence that someone decided to put a name to it, but here we are.

I wondered the same thing. Why do we even have a word for it?

But as long as we do, I looked up “fenestration” to see if it means throwing someone IN through a window. No, it means “the arrangement of windows and doors on the elevations of a building.”

I can’t find any documentation on whether throwing someone out of a window a second time would be “redefenestration.”

According to Wikipedia (so i can’t say its 100% but it appears to be backed up by other sources);

The term originates from two incidents in history, both occurring in Prague. In 1419, seven town officials were thrown from the New Town Hall, precipitating the Hussite War. In 1618, two Imperial governors and their secretary were tossed from the Prague Castle, sparking the Thirty Years’ War. These incidents, particularly that in 1618, were referred to as the Defenestrations of Prague and gave rise to the term and the concept.

There’s also a helpful list of notable defenestrations – given the various methods of torture about in the middle ages being thrown out a window might be considered letting them off lightly ;
https://en.wikipedia.org/wiki/Category:Deaths_by_defenestration

Without even looking, I know non-Communist members of the Czech government “committed suicide” shortly after WWII by throwing themselves out of some hotel windows.

The joke around Czechoslovakia was that they were very polite and made sure they shut the windows behind them after they jumped.

P.S. What is it about Prague that makes people want to throw others out the window??

Last edited 25 days ago by thegue
4

This lived up to the title. I love it! (I mean, not needlessly killing animals, but the fact that every kid in that class probably still remembers that day.)

Test chuckle to Phylum, and a test bad pun reply to Bill.

well, thegue, that mouse certainly walked the Green Mile but, unfortunately, he didn’t go out with a bang but more like a thud.

You taught your students pluralism. You’re a good teacher.

I am at a loss for words.

Last edited 24 days ago by dutchg8r
1